Everyone , including Amber Rudd herself, is now confused about how many times she has been wrong about the Windrush Scandal and what she knew about targets and when , and what she had agreed to or not.

This is a distraction .

One wrong dwarfs all the others – massively.

That wrong created all the harm faced by the Windrush Generation : the Hostile Environment policy introduced by Mrs. May . A policy designed , as she said , to be ‘really hostile’ and to make’ life difficult for those without papers ‘. 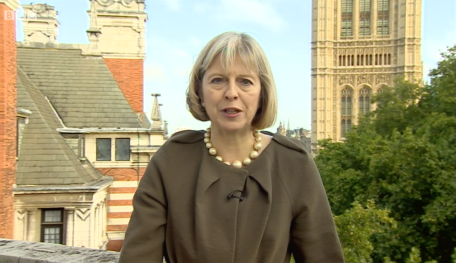 The confusion created by Amber Rudd’s almost daily corrections serves as a major distraction to obscure this simple truth .The architect of the Hostile Environment policy was Mrs May . Everything that has befallen the Windrush Generation flows from her action to set up a ‘hostile environment’.

A Hostile Environment policy should have been accompanied by an Identity Strategy and an implementation plan that addressed the circumstances of those who had made their lives in the UK , often arriving as British Citizens , and who would now find themselves required to produce ‘papers’ to prove a right to be here that they had never expected to have to prove .

The Hostile Environment policy was indiscriminate.It was callously introduced with no thought given to the predictable consequences .This is a catastrophic policy failure and the ultimate responsibility is unavoidably Mrs May’s .

The initials H.S . next to Ms Rudd’s name no longer stand for Home Secretary .

They mean Human Shield . She stays in place to protect her boss .

An array of defences has been deployed . Ms Rudd condemned the treatment of the Windrush generation as shocking , she was concerned that Home Office staff were too focussed on policy and not enough on individuals . It was asserted the Windrush Generation have been caught up in something they should not have been a part of , attributable generally to poor implementation of policy and lack of discretion on its application . The Home Secretary says it would be a mistake to think that the target of net migration in the tens of thousands was the cause of the Windrush Scandal . The issue was the lack of documentation .

As each revelation has come forward about targets and what Ms Rudd should have known , or did know , the defences have become ever more sophistic .

Ms Rudd’s letter to the Prime Minister setting out a 10% increase in deportations was an ‘ambition’ .

The detailed targets contained in a memorandum sent to Brandon Lewis , Immigration Minister at the time were Key Performance Indicators ;  the defence being established here will be that were part of a detailed Performance Management Framework to drive the work of civil servants but at a level of specificity and detail with which a Home Secretary could not be reasonably be expected to be familiar .

The effort to deny ministerial familiarity with targets is inherently implausible.

If it were true it would raise fundamental questions about Ministers’ capability to assess whether policy was being successfully implemented or not .

A former borders and immigration chief said it was “disingenuous” for Home Office ministers to suggest they did not know targets existed for removing people from Britain.

Rob Whiteman, a former chief executive of the now-defunct UK Border Agency, said “of course” ministers knew about such targets, but they would not have influenced the problems faced by the Windrush generation. Rather, “poor policy” was to blame for the scandal.

His comments came after the home secretary, Amber Rudd, denied the existence of removal targets before admitting they were in place, and then finally pledging to scrap them.

“Targets are set operationally by managers but of course ministers would know there are targets,” Whiteman told BBC Radio 4’s Today programme. “They are intelligent people and they will see performance reports, bids to Treasury …’

Stewart Wood , former adviser to Brown and Milliband , makes a fundamentally important point about the defence – ‘it was all about bearing down on illegal immigration’:

When the PM defends herself against justified accusations of appalling, life-ruining treatment of the #windrushgeneration by arguing for tough measures against ILLEGAL immigration, all she does is recommit the category mistake that led to this shameful scandal in the first place.

This is clearly true .

We Should Fear for Our Country

In mounting a defence for the indefensible they are either deluding themselves as to the nature and consequences of their actions ( which is profoundly worrying in terms of their capacity to form and implement policy) or they are prepared to deploy any argument regardless of whether it has any grounding in fact or is inherently implausible .

This is hugely worrying in the context of finding a resolution for all those caught up in the Hostile Environment policy who find their right to be here threatened . How can you solve a problem if you don’t recognise how you created it ?

Finally the team that brought you the Windrush Scandal are bringing you Brexit . We have every reason to fear for our country .