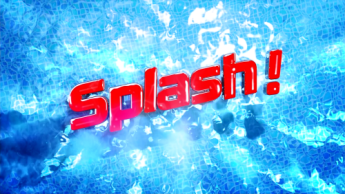 Penny Mordaunt , the International  Development Secretary displayed the same sureness of touch this morning on the Today programme as distinguished her performances on the Reality TV show ‘Splash’ . She unhesitatingly seized the moment to demonstrate her judgement remains as acute and well based as when she told Andrew Marr there was nothing the UK could do to stop Turkey joining the European Union and had to be corrected publicly moments later on the Robert Peston Show by the then Prime Minister David Cameron.

She told Today the government must do a better job in dealing with the immigration cases involving the Windrush generation.

She said she wanted to reassure those affected after claims that some were facing deportation and being denied access to healthcare over UK paperwork issues.

She went on “People who are in that situation, there is absolutely no question of their right to remain, and their right to gain access to services such as healthcare.” She advised anyone who was worried about heir situation to contact their MP.

This falls epically short of the mark.

Firstly politicians shouldn’t seek to hide behind ‘paperwork ‘ and ‘ bureaucracy’ when what is being experienced by the Windrush generation is a direct effect of Mrs May ‘s policy decision , as Home Secretary, to create ‘a  really hostile environment for illegal immigrants’.

Secondly Ms Mordaunt rather breezily placed the onus on those experiencing this manifest unfairness to go to their MP’s to sort it out .

This will not do .

Government created the mess – Government must sort it out .

I am pleased to see No.10 is backtracking at a rate of knots . Having initially refused a meeting request by affected Commonwealth countries this morning , one is now to be arranged . 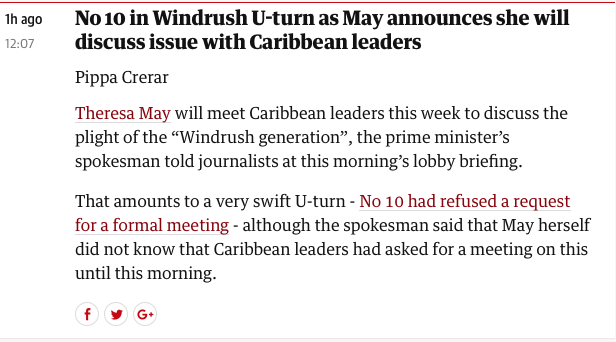 MP’s are now falling over themselves to distance themselves from this insensitive , uncaring and racist mess their own government created .

Even Nick Timothy , who can not entirely escape responsibility for this because he was allegedly acting as Mrs. May’s brain while they were at the Home Office ( I know it is a manifestly unlikely claim in so many respects) is jumping on the Bandwagon .

Maybe Penny Mordaunt’s falling so short of the mark this morning brought home to them the moral bankruptcy of their position . Too little – too late .